In recent years, “evidence based medicine” has become a popular buzzword in the medical community. More than anything, this just highlights the fact that most of medicine is precisely not sufficiently based on evidence, in sharp contrast to – for instance – science or engineering. In short, medicine is – in large parts – still more of an art than a science. Outcome evaluations are rare. This state of affairs in the medical enterprise is owed to many factors, including a strong belief in traditions as well as a culture that places a premium on authority. There are also many good reasons for this. For the most part, it is owed to the idiographic nature of the field itself. Medicine inherently deals with non-reducable complexity in the extreme, combined with enormous biochemical diversity in an applied and high stakes environment. Usually, there is a dearth of relevant data for any given case (typically, there are no baselines and few if any repeated measures after interventions, to say nothing of time-series or controls). This is not an indictment of medicine as a whole. One just needs to know what one is dealing with so that one knows what one can and cannot expect from it. Romantic notions are misplaced and singularly unhelpful.

Nevertheless, there is one field of medicine – reproductive medicine – where outcomes are discrete and countable. Thus, evidence is compiled on a nationwide level and disseminated publicly. The results are sobering. In a nutshell, nature rules supreme. This is a problem, as nature follows its very own relentless evolutionary logic which is as merciless as it is uncaring about individual desires, wishes or merits. The integrity of the y chromosome is a case in point. Most genetic damage – occurring for whatever reason – can be easily repaired by recombination, as there is an available replacement on the other chromosome, effectively a clean backup copy. This is not the case for the y chromosome. How does it repair itself? By natural selection. If important portions of the y chromosome are deleted or corrupted, hard infertility ensues. This is tragic for a given individual with a desire for children, but it maintains the integrity of the y chromosome in the population down the generations in the face of ongoing genetic drift. So much for a case in point of evolutionary logic and male fertility.

As far as women are concerned, it is common knowledge that the fertility of females is closely tied to chronological age and that it dips quite precipitously in the mid to late 30s. This surprises nobody. Likely, this is for the most part owed to the steady degradation of mitochondrial function, specifically the corruption of mitochondrial DNA. What is much less appreciated is that the outcomes of medical fertility treatments follow a similar trajectory. Put differently, medicine fails when it is needed most. This is not an unfair assessment of the profession. There is only so much medicine can do. This state of affairs is obscured by the many news stories celebrating women in their 50s, 60s or even 70s who gave birth due to the miracles of modern medicine. It is often overlooked that these are not pregnancies from their own eggs, and that there is a reason these stories are news…

While these anecdotal human interest stories are certainly inspiring, they do not tell the whole story. A closer look at the publicly available data on the success rates of In-Vitro-Fertilization (IVF) is rather sobering in contrast. 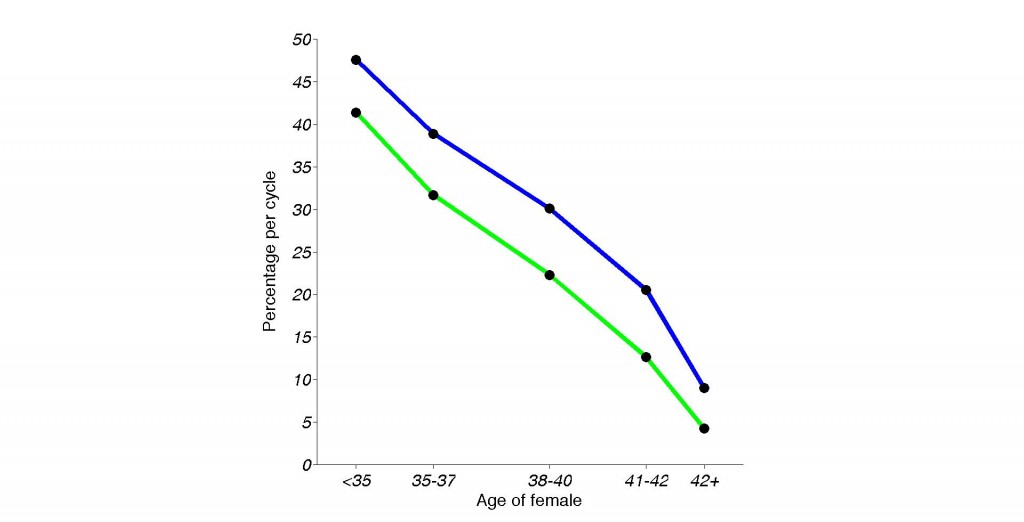 The granularity of the available data on IVF success rates is rather coarse, particularly in regard to age groups, but the trends are clear well enough. The last published data from 2009 show that an under 35 year old woman undergoing IVF has a chance of getting pregnant per cycle of close to 50%. Also, there is a 41.4% chance per cycle that the cycle eventually results in a live birth. Reasonable enough. In other words, within 5 cycles or less, 93% of these women will achieve a pregnancy that eventually results in the point of the exercise – a live birth. This is important, as each IVF cycle currently costs around $15,000 – on average. Fast-forward less than a decade. A women who is past the age of 42 when undergoing IVF has a chance of less than 10% of getting pregnant per cycle. The odds of having a cycle that results in a live birth are even less – a shocking 4.2%. Doing the same math as above, it now takes well over 60 cycles to ensure that 93% of women at that age can give birth from their own eggs via IVF.

Using the same numbers as above, this baby now costs close to a million dollars. Of course, these numbers are way too optimistic, as a steady fertility in the “above 42” group is assumed. In reality, fertility in that age group declines sharply and steadily. Women in that age group do not have these 5 years. Also, this probability calculation neglects the time it takes to recover from IVF cycles that resulted in pregnancy but not a live birth, which delays the entire endeavor further. In other words, in that age range, live births from own eggs can no longer be guaranteed, no matter the time or money invested. Something that can be pretty much guaranteed (for more than 90% of women) less than a decade earlier. On a sidenote, one can somewhat improve these odds by picking a center or hospital that is consistently beating the odds. While it is not suggested to compare hospitals (as their patient populations might differ) in terms of their IVF success rates, I couldn’t fail to notice some hospitals which did hundreds of cycles, year after year, in women over the age of 42 without any live births (some pregnancies) from IVF. I cannot imagine the pain and suffering involved. To say nothing of the heartbreak.

I am also not entirely sure if technological progress offers hope to those who need it most – females in the age group over 42 years – in the near term. As the figure below shows, the total number of cycles of all age groups has increased over 25% in the past 6 years, while the live birth rate per cycle has essentially stayed the same. Even the first successful IVF in 1977/1978 solved an infertility problem that was not related to age.

Given these data on IVF success rates, and considering the mid-40s age range, it might make most sense to use donor eggs, donor sperm and a surrogate. But at that point, you probably should just adopt.

There is a bigger point here. Regardless of political correctness, society should learn to deal with biological realities. Barring some unforeseen scientific breakthrough, female reproductive success rates will remain closely tied to chronological age. While males are not immune from age related declines in fertility, these are generally thought to be more subtle and seem to involve a more elastic age range.

This matters. In many countries, childbearing is delayed later and later. Given the discussion above, it should come as no surprise that in some societies, fertility has now dipped far below replacement levels, particularly in Germany, Japan and Italy. Some societies managed to achieve balance – which corresponds to a fertility rate of 2.1 children per woman, on average, like France, the United Kingdom and especially the United States. In many modern westernized countries like Germany et al., the rate is closer to 1.4 children per female. This doesn’t sound like much, but adds up over time. The last time Germany had a more births than deaths was in 1971. Since then, there have been over three million more births than deaths, and the effect compounds over time. If it is true that demographics is destiny, this doesn’t bode well for the socio-economic future of these nations. This is particularly true as all alarmism about impending doom from population explosions has failed. This was true for Malthus and it is true now, including the ironically named Ehrlich. While alarmism surely sells books, predictions have to be taken to task. If they fail continuously, perhaps we should reconsider their validity. Most consensus estimates now expect world population to level off at around 10 billion by 2100. That number can easily be accommodated in the land mass of the United States alone, at population densities of less than Bangladesh – or the Maldives, if you want to consider a more posh example – has today.

However, the policy implications for societies are deeper than that. Reductions in fertility are not randomly or evenly distributed across the population. On the contrary, it seems to mostly affect the highly intelligent. At this point, IQ seems to be correlated with fertility at -.73. It is easy to see how, as the most intelligent are likely to delay childbearing in favor of education and careers. As we saw, delays imperil fertility, sometimes irretrievably. While there is nothing intrinsically wrong with this, the implications will shape societies, now and in the future.

Throughout the 20th century, the coming Idiocracy was staved off by the Flynn effect, the continuous rise in IQ scores over time. This now seems to be petering out, as most of the gains seems to have come from an adaptation to test-taking formats by a culture that is increasingly based on symbols and formal logic, as well as nutrition.

In the end, wise societies will have to devise cultural solutions in the face of biological realities in order to maintain reproductive success. Culture can be a powerful force. As we saw, putting this burden on medicine alone is too much to ask, at least at this point.

This entry was posted in Science, Strategy, Technology. Bookmark the permalink.