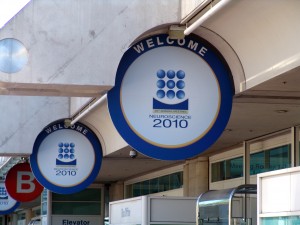 Sorry for the delay in posting, but the reasons will soon become apparent. Also, note that this post was written somewhat in haste. I will update it later. Generally speaking, these “live” or near-live dispatches will have to be just that: Dispatches. I will put all overarching observations in a meta-post at the end of SfN, summarizing the meeting.

The good news is that the – long awaited – SfN is finally getting underway.

The bad news is that I made a big mistake. I usually (by luck of the draw) present on Sunday, Monday or Tuesday at SfN. Have never presented on a Saturday or Wednesday before (as this year). So the mode of operation that I arrived at over the years is to arrive on the first day of the conference and leave on the last day. This served me well, but might have to be modified for cases in which I am presenting on the very same day.

To make a long story short: I stepped off the plane, took a taxi to the convention center and basically went right to my presentation board and start the presentation. I started a little earlier (than 1) and stayed a little longer (after 5). The poster was extremely well attended and received. Not bad, you would think. Normally, yes. But I essentially talked non-stop for what I estimate must have been almost 4 hours. For a presentation like this, one should budget at least 20 ounces of water per hour of speaking. Probably more. That sounds like a lot, but is actually an empirical figure. As I came straight from the airport, I had only one small water bottle with me. That was gone within half an hour. I’ve given a lot of poster presentations over the years, but I think I have never been as hoarse as at the end of this one. Of course, this was also related to the nature of the presentation this year – more on that later. 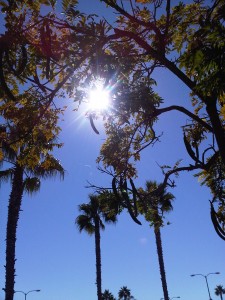 Right outside the airport

Immediately after the poster presentation, I was having dinner with an old friend of mine and his wife. Immediately after that, I went to the mentoring event, which was really quite curious. Then, I went looking for some sort of remedy for the hoarseness, which was surprisingly hard to come by (by New York standards). And then, I just passed out.

*The guards seem to be even more on edge than usual. They follow all rules and regulations to the t. And they are not afraid to use physical force to enforce the rules. Not that that happened to me, but I’ve seen it. For instance, you can’t cross back into the poster hall after 5 pm, no exceptions (retrieving a poster, looking for friends, etc.). Also, you can’t access the poster hall before it officially opens, unless you physically carry your own poster.