Summary: Manic Monday is already upon us. A lot of painful choices have to be made, particularly in regards to the social calendar in the late PM.

Here is what I said before the day went by:

>I encourage you to attend Patrick Kennedy’s speech on the Neuroscience of moon landings. From what I understand, he is the real deal when it comes to the things he is slated to talk about. >Ballroom 20 (where else?), 1-2 pm.

And oh boy, did he deliver. I am not known for my optimism regarding the state of politics. As a matter of fact, I could justfully be accused of taking a rather dim view on the intents and purposes of most politicians. So I was not quite prepared for his “presentation”, which was actually much closer to a political rally than any other I’ve ever seen at SfN. As a matter of fact, it was unlike anything I’ve ever seen at SfN – it was an actual political speech. He impressively illustrated that one doesn’t have to have a PhD in order to have or care about mental illness. The address was extremely powerful and heartfelt.  When Kennedy related his lifelong struggle with bipolar disorder and how it has marred his entire life, it became apparent that this topic is personal to him. This is an issue Kennedy clearly cares about very deeply  – more than once, he was on the verge – as was I. Moreover, his considerable passion for the issue was clear. He was effectively shouting more than once, as well (in a good way). In short, it was a galvanizing and highly successful speech. The use of visual analogies was brillant and effective. He conjured the image of a highway that we have to build instead of focusing on individual diseases and topics (as we do now). In this highway-based system,  we would not forget about the specific issues, but they would be represented by  off-ramps to specific topics, while the focus remains on the highway, the big prize. He emphasized the importance of this common goal by linking it to another heroic human achievement: The moon shot. Something that was unimaginable when it was announced by JFK in 1961. Today, we face a quite similar challenge, but one that involves the exploration of inner space. 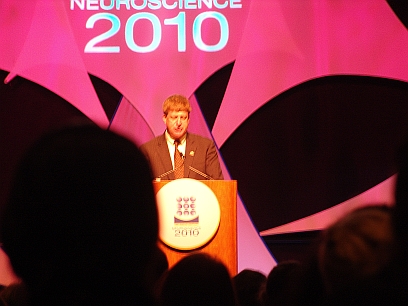 Patrick Kennedy doing what he does best, at SfN 2010

This challenge surely is daunting, but we should not be daunted. We should be energized by the magnitude of the challenge, it sure is worth it. Kennedy cited numbers making clear that we can’t afford not to do this, in the long run (something to the effect of a  loss to the US economy on the order of a trillion dollars annually, due to diseases of the brain and mind). The speech culminated with his announcement of a brain research foundation and initiative (moonshot.org), as well as the crucial need to “vote your mind” (the rationale being that representatives *will* listen if they realize that something is a priority for their constituents). Overall, Kennedy’s highly emotional and sincere speech was quite effective in conveying his message. At several points in his speech, he was interrupted by spontaneous applause. He also received a standing ovation in the end.

The only part of the speech that fell completely flat was his choice of framing many of the urgent needs for brain research in terms of the need to help and “rescue” military veterans. This illustrates the importance of knowing your audience. In this regard, the international ivory tower differs sharply from main street USA. I’m sure that this part of the speech would have been a wild success with most audiences, but not this one. In brief, I think it is fair to say that the vast majority of neuroscientists are – at best – indifferent in their attitude towards the military, defense spending and veterans issues. At the end of this part of the speech, Kennedy actually asked the attending veterans to get up to receive some appreciation (in the form of applause) for their service from the audience. An awkward moment, to be sure. Out of an audience of thousands, no one got up at first, then – reluctantly – a handful of people.  They did get their applause, though. Not surprisingly, during the Q&A session, Kennedy was also questioned on why he coached the urgent need for brain research almost exclusively in terms of veterans affairs. He defended his choice of emphasis by noting that neither political party can afford to give up on the very people that kept us safe from the terrorists. He also noted that the defense budget not only dwarfs all other discretionary spending, but that it also is the only pot of money that is still growing. Finally, he pointed out that the mental health issues of veterans are increasingly salient and well documented, such as their much increased likelihood of committing suicide, their much heightened likelihood of incarceration, and so on. The other issue Kennedy was pressed on during Q&A was that the speech seemed a tad nationalistic, given the fact that almost 40% of SfN members are now residing outside the US. Kennedy clarified that it will in fact take an international effort and cited the international space station as an example of international cooperation. And with that, this particular presentation ended.

There is a lot more that happened on that day, and I will elaborate on it as soon as I get around to it.