You probably won’t agree with me on this one, but I feel strongly about it: The meeting feels much emptier and somewhat “lighter” this year. I know that the reported attendance of close to 32,000 is in line with expectations (good for the Society), but something feels off. It is relatively easy to get seated at restaurants (sometimes at the last minute), even “hot” sessions feel less than entirely full and the lines at the concession stands seem shorter (not that I would suggest to buy anything there). All of this was unthinkable at SfN 2004 or 2007 in San Diego – to say nothing of the meetings in between. Even Atlanta 2006 felt crowded in comparison.

Where is everybody? Also, one might consider that – while the SfN membership numbers keep rising continuously, meeting attendance has flatlined for years. Therefore, the yield is down, way down.

See the figure (numbers from SfN, figure is mine (Matlab is your friend)).

What is going on here? It seems most plausible that the reported meeting attendance numbers are real but that the lower yield indicates that a different mix (grad student/post-doc/faculty) of members attends the meeting and that they are “using” the meeting in different ways. Also, I wonder how the attendance count (“once you check in, you never check out”), affects this. Perhaps people are leaving earlier than usual, which might well account for the felt drop in attendance.

To summarize the trends figure on the right, it seems that membership is at an all time high whereas yield is close to an all-time low within the reporting period (2006 was the all-time low, with a yield only a hair above 0.70). Meeting attendance has effectively plateaued in the past 5 years (with an all-time high water mark in DC in 2005). Yield seems to be somewhat related to attractiveness of meeting venue, but seems to be even more strongly tied to economic conditions, in particular the economic condition of scientists. In the truly “fat” years, yields exceeded  1, as in San Diego 2001, where the meeting attracted many of the membership base as well as disproportionate numbers of vendors. This reflects the economic boom of the late dot-com bubble times around 2000. There seems to be about a 1 year delay between developments in the general economy and the time they impact the meeting, which makes sense. Moreover, we see low yields in times of economic distress, for instance in 1994 (1 year after the recession of 1993) or now. The 2006 drop is unusual both in its sharpness and severity. Moreover, membership fell as well in 2006, which is rare. What happened? It is actually quite simple. Based on the budget requests by two US presidents (Clinton and Bush), the NIH budged effectively doubled between fiscal year (FY) 1999 and FY 2003. Those years saw annual budget growth rates of 15% or more. However, the NIH budget has remained essentially flat after FY 2003. If one takes inflation into account, it might even have dropped in real terms. These macroeconomic developments have personal consequences. The individual PI who received large R01 awards with relative ease in 2000 or 2001 saw that funding expire in 2005 or 2006, with little chance for renewal. 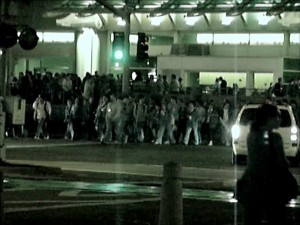 Plenty of people in front of the convention center. What's on their mind? Brains, probably.

And so – without funds – they didn’t/couldn’t go to the meeting, some of them couldn’t even remain members. I didn’t plot GDP growth or R01 funding rates as well, as the graph was getting too busy.

We don’t have enough data points (yet) to seriously model this without blushing, so I will leave it at these observations for now.

Also, this is not to say that there were still – in absolute numbers – plenty of people around.

Leave a Reply to Mark B. Cancel reply