Therapy with extremely bright light (10,000+ lux) has been known for a long time to bring about remarkably strong and – if done right – remarkably positive effects. 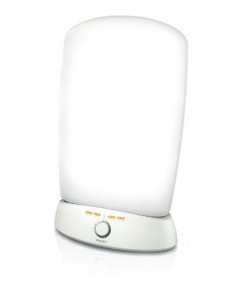 It can “cure” Seasonal Affective Disorder (aptly named SAD), as well as re-synchronize sleep/wake and circadian cycles that became desynchronized from a modern lifestyle (specifically bright light at night, and lack of bright light in the early morning (due to our modern caves)). Increasing numbers of people are now believed to suffer from DSPS or even near-free running sleep-wake cycles. I don’t think this is a coincidence. Some people are liable to be sensitive to even relatively dim light levels. But the luminance of computer, laptop and TV screens can be considerable. This will reliable shift the sleep-phase. The human phase response curves are well established. So if you are groggy in the morning, but getting more awake at night, I highly recommend to lay off the coffee to force yourself awake (a debt that you will have to repay in the future, at high interest) and re-synchronize your sleep-wake cycle instead. To say nothing of actual depression. It is certainly worth a shot. Or a light. As they say, just ignite a light and let it shine. But NOT at night.

Anyway. That is actually not the point of this post. This is all very well established and extremely well understood, as far as our understanding of the brain goes. We know the cells in the suprachiasmatic nucleus that do the synchronization of the sleep-wake cycle. We do know the chemicals that mediate the changes (Melatonin, mostly). We know the target regions in the brainstem. More recently, we even discovered the intrinsically photo-sensitive ganglion cells in the retina that relay the signals to the suprachiasmatic nucleus. We figured out the spectral sensitivity of these neurons and we now know that – and why – intense short wavelength (blue) light can do the job. This is neuroscience at its best. 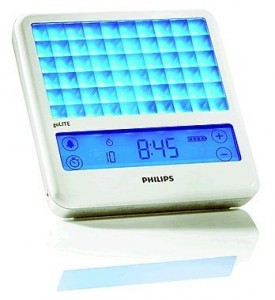 Now, I am a little puzzled by the radical proposal of a company from Finland, which introduced the “Valkee”: They point out that it is not the eyes that need the bright light, it is the brain itself (which is by implication inherently photo-sensitive). Thus, the light is shined into the ears, in a walkman-like Gizmo.

I don’t fault them for innovative thought, but if this actually works, nothing that we think we know about the brain is likely to be true (including everything I said above about the suprachiasmatic nucleus). They quote a scientific study from the University of Oulu, but don’t give a reference and I could not find it. Certainly intriguing, but I am sceptical. This does reek of a similar proposal that made headline news in the late 90s. The claim was that shining bright light on the back of the knee can fix jetlag. This was later – thoroughly – debunked. Shining light exclusively on the back of the knee will not influence jetlag in any way. Note that “extraocular” influences of light on physiological processes cannot be ruled out entirely. For instance, calcitriol (the bioactive form of Vitamin D) is a hormone that is – with some intervening steps in the liver – synthesized in the skin upon UVB light exposure. If Vitamin D was significantly involved in circadian rhythms, and the light contained UVB, an extraocular effect would be expected. Of course, this is just a proof of concept. 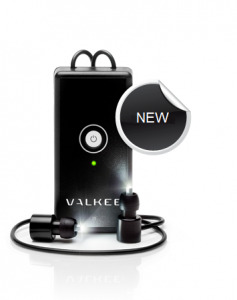 Of course, if the “Valkee” works, one wonders what other bodily orifices might work. What if it has nothing to do with the brain? 😉

But in all seriousness: I cannot conceive a mechanism by which the “light into the ear cures depression” effect could potentially work, nor does the website suggest one. They allude to the notion that the brain itself needs the light. As far as we know, this is wrong. Contrary to popular belief, it is completely dark in the brain. So what is the mechanism? Besides some strange form of circadian synesthesia, I am drawing a complete blank. Same thing with the evolutionary significance. Bright light in the ear is not likely a condition often encountered in the natural environment. But a lack of imagination of a reasonable mechanism is not a priori evidence of impossibility. Stranger things have happened. Maybe if I can scare up the cash, I’ll buy one. And report back.

This entry was posted in Neuroscience, Optimization, Psychology, Technology. Bookmark the permalink.