A primer on the neuroscience of happiness

The age old question of what makes for a happy life is of great interest to almost anyone who is in fact alive. A classic answer, building on Aristotelian notions of happiness, is provided by Charles Murray who points out that lasting life satisfaction is likely to derive from vocation, family, community and faith. We can now add a fifth element to these considerations, namely the neuroscience of happiness.

That is not to say that studying neuroscience will necessarily provide happiness. But there is mounting evidence as to what will *not* lead to increased human happiness. 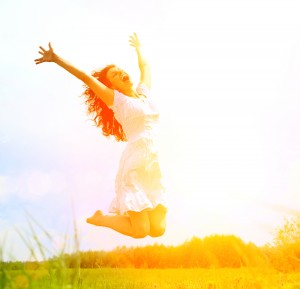 Happiness is often symbolized by depicting people with arms spread out, people jumping and people looking into the sun.

As a matter of fact, perhaps the most important insight from neuroscientific considerations is a conceptual one. The brain uses happiness as a means to an end, getting the organism to do the right thing. It is by its very nature transient and elusive. Neither brain, nor reality are designed to make happiness easy to come by, nor to make it last. That would almost certainly interfere with survival- and reproduction goals. Ironically, this makes happiness *more* valuable and desirable, as evinced by the number of talks and books on the subject. If it was easy, there would be no need for anything more to say or do, as everyone would just be happy.

Of course, if one is really skilled in the ways of the sage, one can override and sidestep this programming. However, *simple* solutions like acquiring more stuff will not work.

Why? Because if they would, you would already be happy. One simple cannot expect improvements in material wealth to improve one’s subjective happiness in the long term. On the contrary.

Consider this: If you are reading this, it is likely that you are living in a magical palace that would have been unimaginable to most of your ancestors, even if your living quarters are modest by contemporary standards. Look around you. You can effortlessly turn on lights with the flick of a switch, at any time of the day or night. You have fairly well insulated windows that maintain a considerable temperature differential to the environment. You have a non-leaky roof over your head. Your walls are made of stone or a similar solid material. You command virtually endless quantities of potable water, both hot and cold, at a trivial cost. You also have a sewage system in place that makes waste disposal largely a non-issue. There are people collecting your trash, making this chore an afterthought. Your kitchen and household appliances replace a veritable horde of servants. Your refrigerator allows you to store large quantities of exotic foods from all over the world for long periods of time without spoilage. Your stove allows to prepare warm meals without much smoke or serious danger of fire, to say nothing of the wonders of the microwave which allows to do all that at the push of a button and in no time. Radiators and air conditioners allow you to keep this place at the desired comfortable temperature at all times, regardless of outside conditions. The most humble TV and radio seamlessly connect you to cultural content and information from around the world, again – remotely. The list is endless.

And this is just one aspect of your life, your living quarters. From the perspective of your ancestors, you live in unimaginable luxury. Yet, you take all of this completely for granted and most likely never give it a second thought.

But there is more. How did you afford this place? Almost certainly not by doing backbreaking work. Not in this day and age. Nor are you likely afraid to lose it all due to war or natural disaster. While these things still do happen, it is major news if they do, and there are local, regional, national and international relief efforts waiting in the wings if disaster should strike.

As a matter of fact, in this age of globalization, you are almost certainly doing business with almost everyone on the entire planet on a daily basis, making seminal contributions to the promotion of peaceful commerce, cooperation and trade without even being aware of it. Due to the way the system is set up, this all magically happens just by going about the things you do. Going to work, shopping for groceries, etc.

On that note, if you are reading this, you are also likely to own a smartphone. This “phone” connects you – at a modest fee – to virtually every other human on the planet as well as to the combined knowledge of civilization since time immemorial. Wirelessly, without cords of any kind, for long periods of time. On top of that, it can carry electronic versions of thousands of books, songs, it can play videos and – by the miracle of apps – double as a flashlight, mirror, wallet, notebook, voice recorder, photo album, map, calculator, camera and video camera, among many others. Yet, it fits into your hand.

How much do you think would such a device have been valued at a few short decades ago, for instance in the 1970s, if it was even conceivable?

Now, shortly after their arrival on the world scene, smart phones are mostly impacting human happiness *negatively*, when something doesn’t work quite as expected. Which is the first hint that expectations are the real driver of human happiness. If you expect a mapping to get you to your appointment and it doesn’t, you will feel let down. Naturally.

You should be in awe. You really ought to be amazed. Every day, all day. But you are not. Far from it. That would get in the way of achieving your (evolutionary) goals.

Essentially, you fell victim to a confusion of timescales. This is not uncommon. Most people assume that what will make them feel good in the short term (rewards) will make them feel good in the long term. But that is not the case. It’s a trap. If you go down that route, you will just need ever larger and ever more varied rewards just to feel the same level of satisfaction. Which might be good for the continued growth of GDP, but not necessarily for you.

The point is that unimaginable increases in the standard of living in rather short periods of time did not make you any happier than people living a couple of generations ago. It is naive to assume that future increases in standards of living will raise human happiness as a whole. At least not in absolute terms. There is evidence that material possessions can impact relative happiness for social reasons, for instance making you happier if you have a bigger house or TV than your neighbor or making you feel bad if your phone is not as advanced as that of your colleague. But that won’t change the level of happiness of society on the whole. 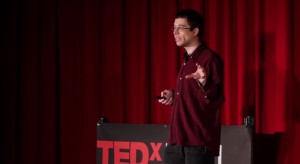 The neuroscience of happiness

Of course, this topic is vast and cannot be adequately covered by less than a treatise. So a short primer will have to suffice for now. Here it is.

1 Response to A primer on the neuroscience of happiness