It is important to use the right tools for a given job. Science is no exception. In particular, given the vast amounts of data that are now routinely encountered in the field, one will want to use the best available data analysis tools (by whatever metric one prefers – ease of use, speed, efficiency, versatility, etc.)

In neuroscience, there is a prevailing sense that MATLAB currently dominates the market for analysis tools, but that Python has a lot of momentum.

Is Python in the future of brain research?

To get an empirical handle on this, I decided to search Google for a stock phrase employed in the vast majority of methods sections of papers (“Data were analyzed using x”), replacing x with a variety of modern – and presumably commonly used – analysis tools. For the sake of completeness, I also search for “Data were analyzed in x” and “Data were analyzed with x”, then adding them up (although the vast majority of phrases included “using”, not “with” or “in”). And yes, this is the passive voice. Most scientists are about as well trained in writing as they are in programming…

The results are below and they strike me as surprising, to say the least. A whopping 8 (in words, eight) hits for Python, 5 for Octave and none for Julia. 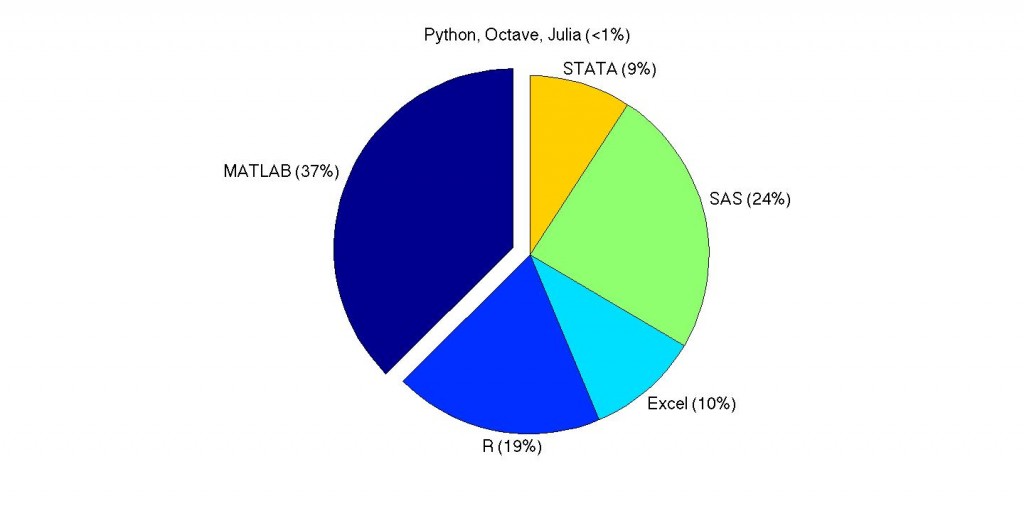 Results of the Google search (as of 09/26/2013). The slice representing Python, Octave and Julia together is too small to be visible. Aptly, the data underlying this figure were analyzed using Matlab.

So what is going on? Are scientists – despite all the enthusiasm for Python, Octave and Julia – not actually using these methods in published papers? Is there a systematically nuanced way of grammar usage that I am missing?

Regardless of the validity of these particular results, there can be no question that Matlab cornered the analysis market these days (at least in neuroscience – I presume the heavy use of SAS and Stata takes place in other fields).

Ironically, this is cause for concern. Success leads to dominance. Dominance leads to a sense of arrogant complacency that is not warranted in the field of technology. Just ask Nokia or the ironically named “Research in Motion”, ill-fated maker of the blackberry. Once a competitor has gained momentum because the monopolist missed “niche” developments, it is almost impossible to halt it.
To date, MathWorks has completely missed out on capabilities for online deployment of code. It is quite disgraceful actually, as this is now routinely done in Python and R. Does MathWorks have to be shamed into doing the right thing on this?

Finally, I hope we can move beyond primitive tribalism on this. I do understand that it comes naturally to people and that it is ubiquitous – be it with regards to computers (Mac vs. PC), cell phones (Android vs. iPhone), sports, etc.; however, this kind of brutish behavior has no place in science. All that matters is that one uses a suitable tool for the job at hand so that one can do the science in question and hopefully move the species forward a bit. Moreover, it is understandable that any self-respecting programmer can’t have things to be too easy or straightforward. Otherwise, anyone could do them. That might indeed be the chief problem of Matlab.

Seriously – it doesn’t matter as much which language you use to program as long as you are in fact programming. There is a simple reason for that: The success of western civilization allows for a second – heavily incentivized – route to rewards, namely social engineering (by hacking some fairly primitive tribalist circuitry). So the waves of BS can rise ever higher. But programming has to work. So the BS can only go so far. And we need more of that. More reality checks (in the literal sense), not more BS. We have too much of that as it is.

This entry was posted in Matlab, Neuroscience, Psychology, Science. Bookmark the permalink.