Explaining why some people see “the sneaker” as pink, even though its pixels are grey

If you have a couple of minutes and want to help us get to the bottom of some of the more subtle aspects of sneakers, crocs and the like, you can click here to donate your data. 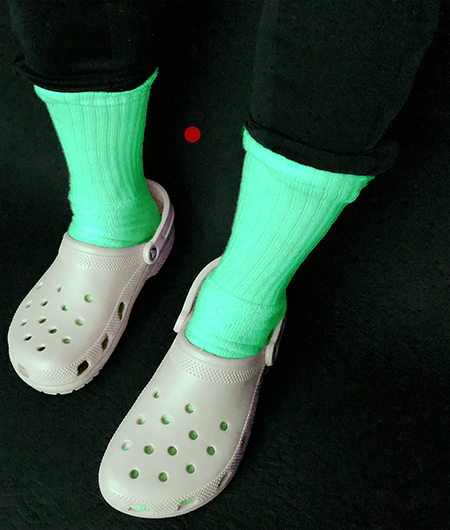 What color are these crocs?

*We are aware that lights don’t have colors. Notoriously, lights are not themselves colored, as the color experience is created in the brain. However, light – a form of electromagnetic radiation – has a frequency, which corresponds to a certain wavelength. Humans see lights in a relatively narrow wavelength range, typically between about 400 and 700 nm. Radiation with longer wavelengths (think a laser with 650 nm) is typically perceived as red, whereas one at 441 is perceived as blue. Generally, lights with longer wavelengths reddish, shorter blueish. Being aware of all that, we say “red light” as shorthand for light that contains power at predominantly long wavelengths, to make for a more concise text, much like neuroscientists say that neurons have “tuning preferences” (say for stimuli of a certain orientation or spatial frequency), being fully aware that people have preferences, neurons (lacking agency) do not. In other words, most neuroscientists say that neurons have preferences as a shorthand to make communication more efficient, they are not committing a mereological fallacy, as they are sometimes accused of by philosopher. The same applies here to our use of colored lights or pink shoes – the “pink shoe” is shorthand for a shoe that appears pink to most observers without visual impairments and under typical lighting conditions.