How physically taxing is SfN? Quite a bit!

Oh the daze of the post-SfN haze. If you did what I did, and feel like I feel, you can probably relate to this. The intensity of this particular pilgrimage is legendary. Having just come back from it, I can certainly see why SfN acquired this reputation. 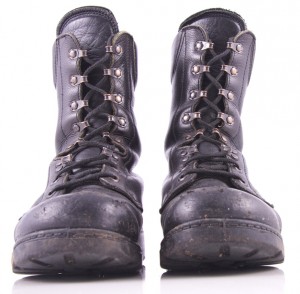 Be sure to bring the right kind of shoes.

But in the absence of data, it is all just that: The stuff of myths and lore – hearsay, effectively. As scientists, we can do better than that. Therefore, I took the opportunity to get a more objective handle on this issue. In brief, I might as well have ran 2 marathons instead. Read on if you want to know how that figures. Of course, n is only = 1. If that bugs you, help me get more data next year. Or help me get data from other conferences.

Before I elaborate on this, I want to comment on the pilgrimage aspect of the meeting experience. Some of us come from far afield. Talking to some people who had flown in from other continents, I want to emphasize that it is crucial to arrive at the meeting venue a couple of days early. Otherwise, the jet-lag will kill half your meeting. I think a reasonable rule of thumb is to arrive one day early for every 3 hours of time difference. And it’s not like that time is wasted completely. You can take in all the sights and sounds early, then focus on the meeting once it begins. It is not likely that you will be able to catch up on sleep once the meeting is underway. [poll id=”6″]

Obviously, the n of this poll is still low, but the median of 6, mean of less than 6 hours per day definitely has the ring of truth to it.

So how physically taxing is the meeting? In order to address this issue, I was wearing a device to measure caloric expenditure for the duration of the meeting (and beyond, actually). The device in question is the “bodybugg” system. It was obviously named before the days of the raging bed bug epidemic of 2010. But it actually works quite well, insofar as it time-stamps all activity and allows you to look at time courses later on. It works by the virtue of a multi-axis accelerometer, heat sensors, conductance sensors, and so on. I was quite suspicious of this technology, but I read the literature that addresses the validity of these measures (e.g. here or here) and they are – by and large – solid. There are some nonlinearities, and some ranges in which the calorie-expenditure estimation fails (e.g. if you can walk without breaking a sweat or raising your body temperature, the bugg has no way to tell what is going on), but by and large, the science behind it is solid (enough for my purposes) and the readings I get are within reason. On top of that, the pedometer aspect is unimpeachable. I cross-correlated with an analog pedometer as well as counting the steps myself and the numbers check out. So without further ado, here is the data. To put their meaning in context, I will contrast them with some pre-meeting/non-meeting reference days. Apologies for the subpar visuals, but at this point, the bodybugg (more like body bug in this respect, I guess) does not allow the export of raw data. I bugged them about this, but they don’t care. So on the x-axis, we have time, on the y-axis are caloric expenditures per minute. I also added two lines for total steps and total calories/day.

This is a pretty typical weekday. Walking to the subway, then walking to work. Doing all kinds of stuff at work, then going back home in the evening. Looks about right. Now for a typical weekend day:

This also makes sense. I am still doing stuff (and expending calories), but I am walking around a whole lot less. Now for some extreme constrasts. This is the day I’ve been moving house. A busy day, to be sure. 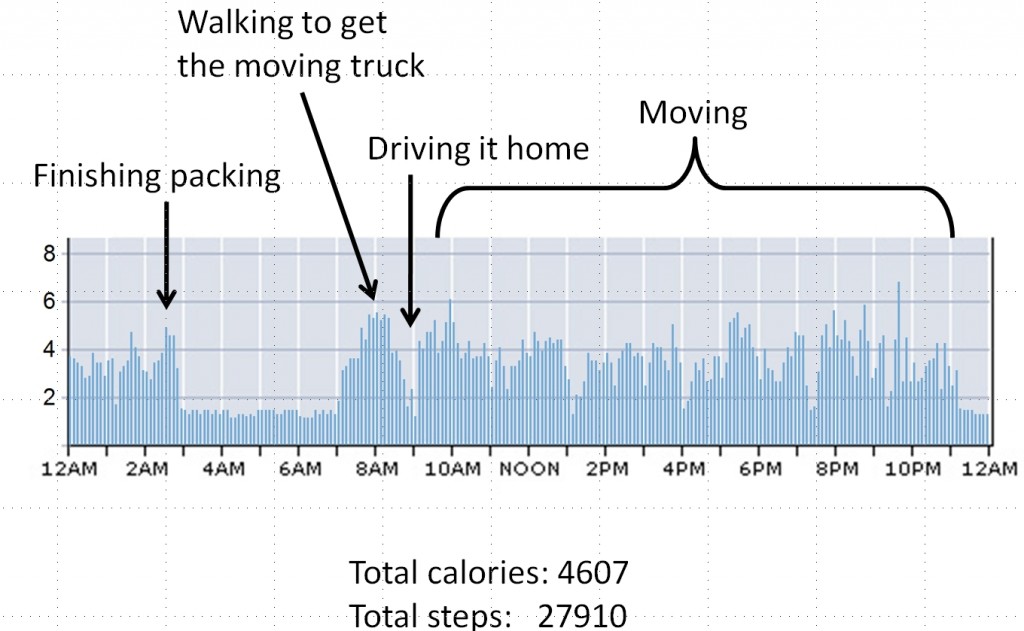 And just for the hell of it, let’s throw a weird one in. Walking from Hoboken, New Jersey to New York University. A little bit over 20 miles. 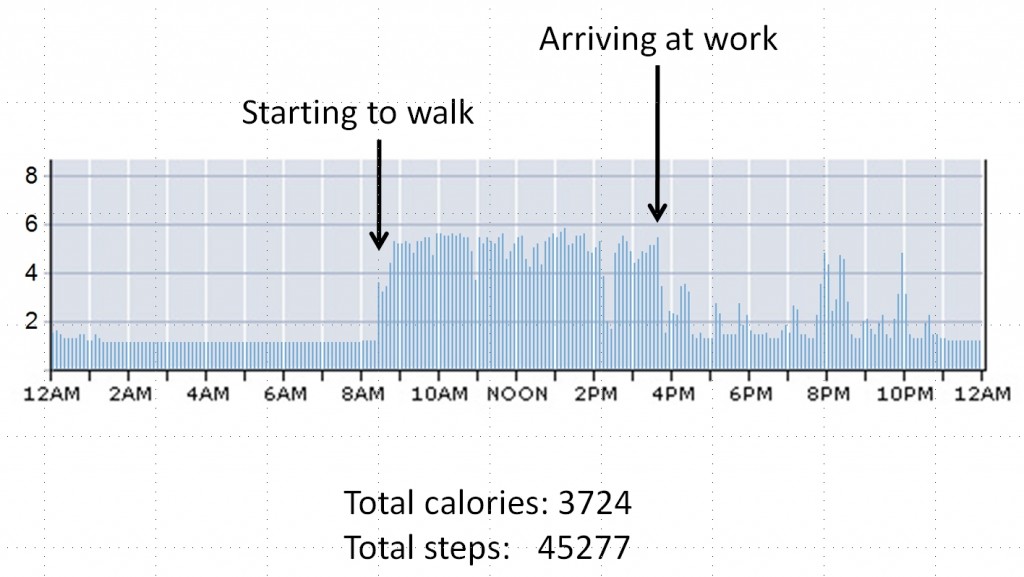 Now, how about SfN, the world wonders. Here is the data from Saturday, day 1: 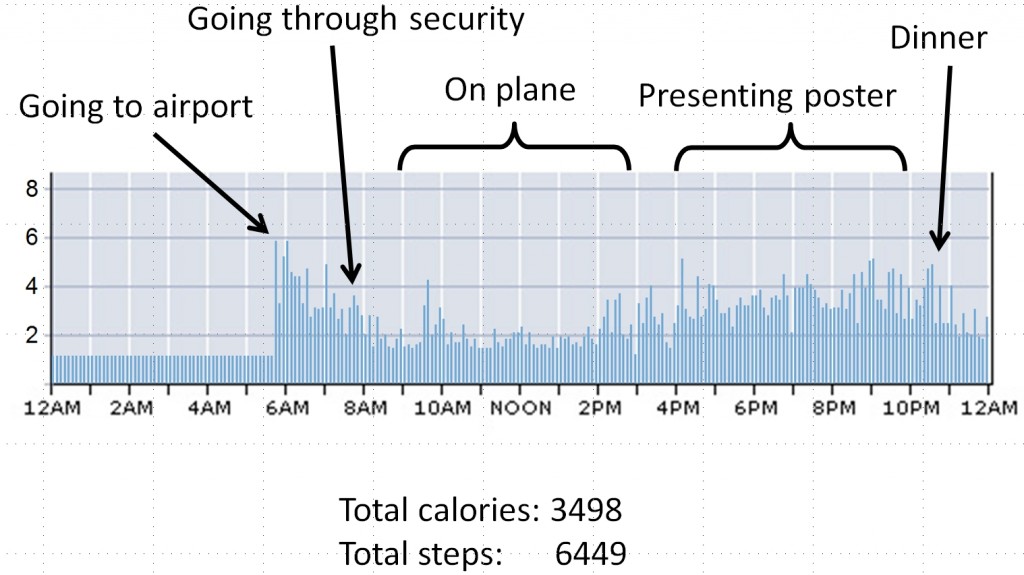 A tad low on the steps, but it makes sense. I was sitting/standing around for most of the day. First on the plane, then at the poster, then at the dinner. Note that the bodybugg never left EST, so this is all plotted in EST. Otherwise, some of these plots won’t make any sense. How about Sunday? Here goes 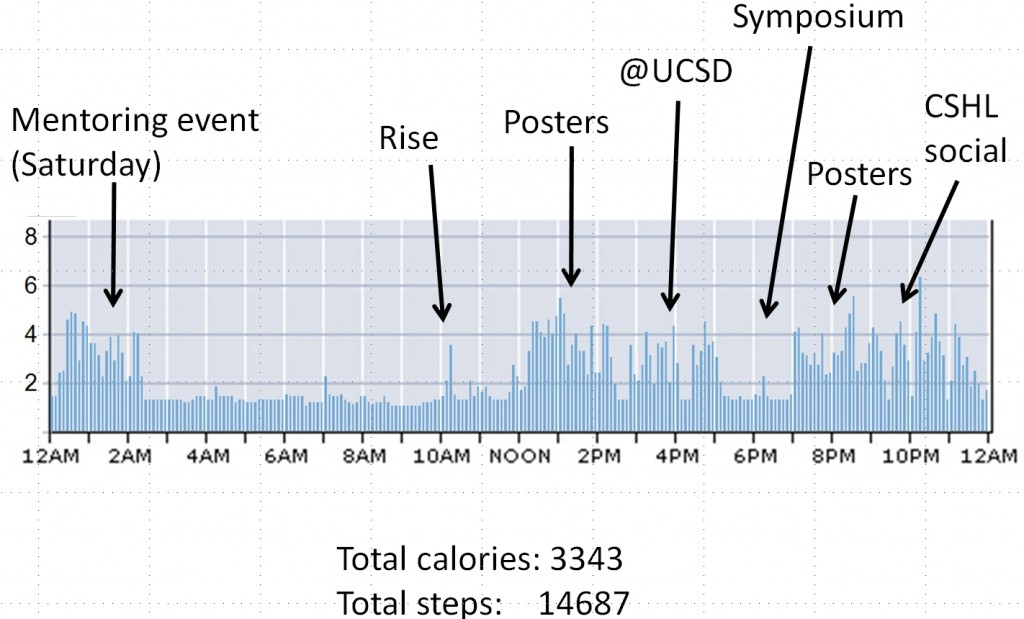 This looks quite right. As long as you take the 3 hour time difference into account. The same is true for Monday: 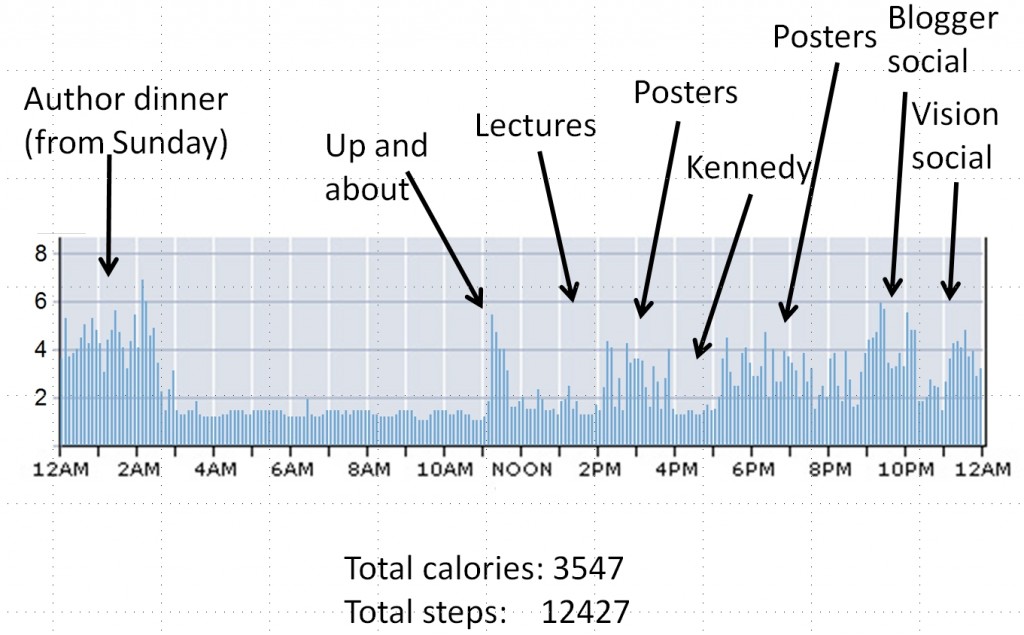 Note that these are not comprehensive. For instance, I also was at the “learning to see” lecture on Monday PM, but the figure got too busy. Tuesday? 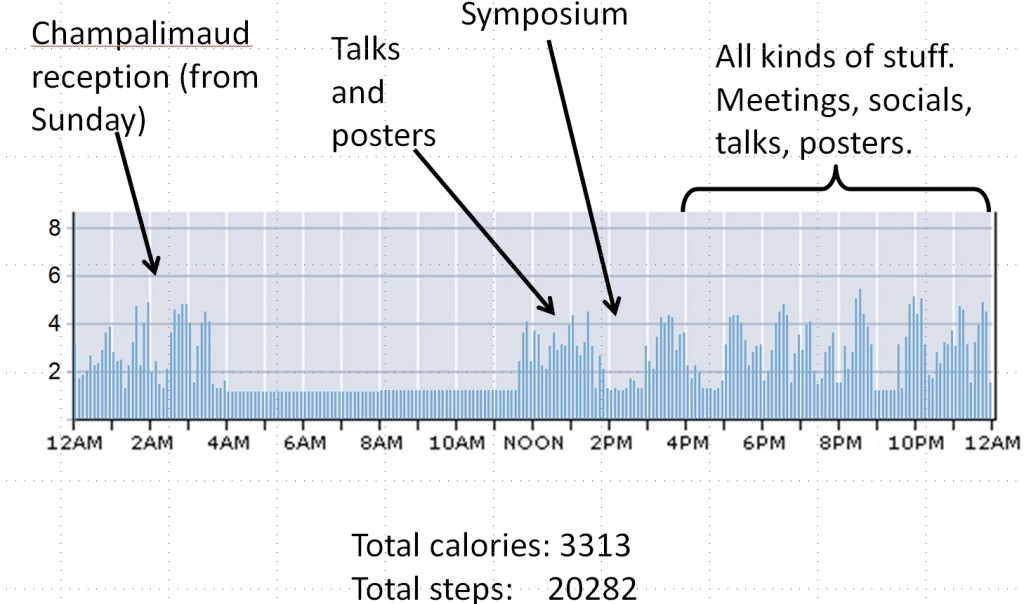 The tail end of Tuesday is just crazy. All kinds of stuff going on. I’m not going to single any one particular thing out. And finally, we have Wednesday. 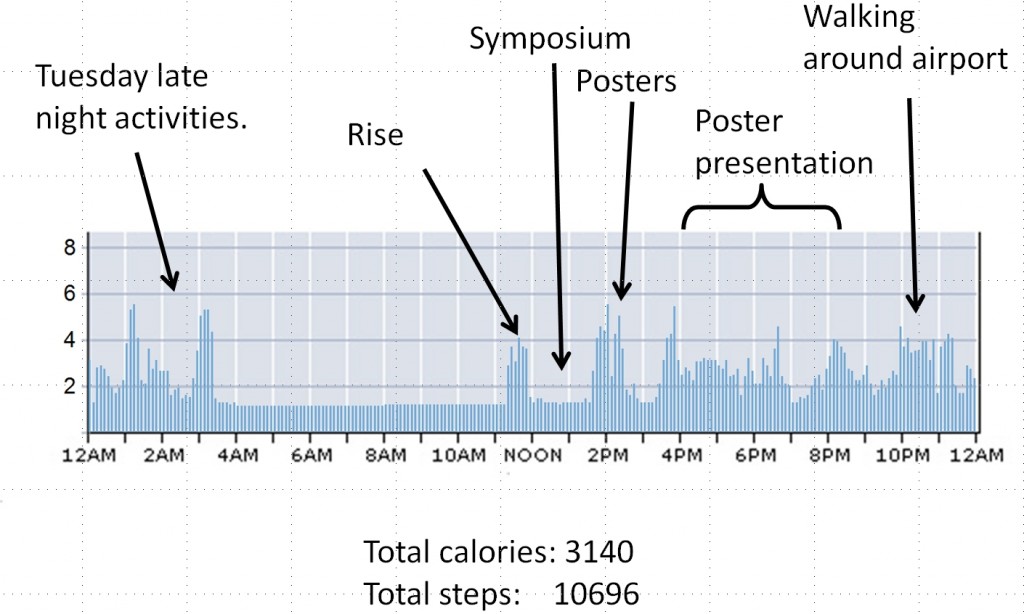 So that gives you an idea of the time courses. To sum it all up, we average the values over the 5 days and compare them with the reference values.

As you can see, A typical SfN day is physically much more taxing than a typical workday or – in particular – a typical weekend day (of mine. Your mileage might vary), but not as taxing as walking 20+ miles and nowhere near what is involved when moving house. But the strain at SfN is cumulative. We typically don’t move house five times in a row. So keep this in mind when planning SfN 2011. To the uninitiated, this might all seem a bit abstract, so let me put this in context for you. Had I stayed home on those 5 days, I could have expected to burn through about 12250 calories in the same time frame (Saturday to Wednesday; given my data above as typical, which they are). But as it was, I actually expended 16841 calories at SfN. 16841-12250 = 4591 calories. How much is that? A lot, actually. According to “runtheplanet“, it is enough energy to get someone of my body weight through two marathons (26.22 miles each). Note that – for the most part – this energy was *not* just expended on walking around more. There is a modest increase in overall steps compared to staying home. But the bulk of that extra energy spent went into a different kind of activity. Mostly mental activity, I would have to guess. As we all know, the brain runs on sugar. Now, that certainly explains a lot. It is a very simple equation:

That puts things in perspective. In light of these results, I think it would make sense to re-brand the event. But how? “Iron man” is already taken. In the post-2008 recession years, “Goldman” has fallen in disrepute. What to call it? “Nerdy man”? Probably too sexist. How about “Nerdy person”? Sounds awkward. Suggestions welcome.

4 Responses to How physically taxing is SfN? Quite a bit!