The paradox of progress

I often wonder how people managed to get by a thousand years ago, without effective anesthetics or antibiotics or even a fundamental understanding of the underlying causes of illness and disease.

However, I realize that people a thousand years from now will wonder the exact same thing about us. For instance, we still don’t have effective antivirals, cancer treatment outcomes have largely stalled in past decades and our available “antidepressants” (as well as psychotropic agents in general) are woefully inadequate.

Put differently, not only do we have a long – and increasingly hard – way to go (the low-hanging simple fruit having been plucked a long time ago), our advances might even leave us worse off in the meantime.

For instance, if the Mongols were entirely ignorant of even the most fundamental tenets of medical science – attributing human ailments to animal spirits instead – this entire aspect of human existence won’t garner much attention. One goes about one’s daily life, if one gets sick one can pray and hope for the best and should one succumb to one’s illness, well perhaps that is just fate.

Neuropsychology is in a similar position. We know that the state of the brain matters. We can even correlate individual lesions with striking mental deficits such as attention in conditions like hemineglect or Balints’ syndrome. And that’s where the state of the art ends. We are much better at diagnosing these conditions than being able to do anything about them. 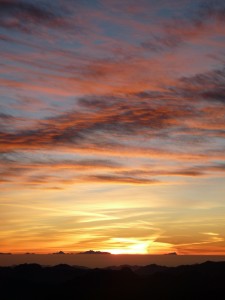 The promised land, as seen from the desert. It is a far way off.

This state of affairs isn’t unique to neuropsychology either – it basically characterizes the situation in almost all of the neural sciences. The mongols didn’t appreciate the importance of brain chemistry. We do, but there is preciously little we can do about it. For instance, ADHD and ADD are fairly common and it is a good bet that dopaminergic neurotransmission is impaired in these conditions. However, we can’t be entirely sure what is wrong in an individual case and even drugs effective at modulating dopaminergic neurotransmission, e.g. Ritalin *downregulate* the expression and sensitivity of dopamine receptors in the long term. It also tends to interfere with other cognitive systems, such as memory in susceptible individuals. I have no doubt that in the long term, we will develop much more selective agents that work with the individual biochemistry and *up*regulate dopamine receptors in these people.

So we are basically in the position of Moses, wandering around in the desert for decades on end. We know the promised land exists and that we are on our way, but the path there will be hard and we will probably not live to see it (but endure all the suffering along the way). That is a truly harsh fate – having come so far only to realize that true progress eludes us further yet. Future generations – those living when the progress has been realized – will shake their head and wonder how anyone could live under such clearly inadequate conditions.

Again, the Mongols didn’t have this particular problem. I think we might be well advised to develop philosophical coping mechanisms that let us deal with our peculiar and – I would argue historically unique – position: Due to the very progress we made, we know that our available treatment options are far from ideal for many (if not most) conditions. We have come a long way, but at this point, it mostly just highlights how far we have yet to go.

This entry was posted in Philosophy, Science, Social commentary, Strategy. Bookmark the permalink.

1 Response to The paradox of progress