Tracking the diversity of popular music since 1940

This is a rather straightforward post. Our lab is doing research on music taste and one of our projects involves sampling songs from the Billboard Hot 100. It tracks the singles that made it to the #1 in the charts in the US (and for how long they were on top), going back to 1940.

Working on this together with my students Stephen Spivack and Sara Philibotte, we couldn’t fail to notice a distinct pattern in the diversity of music titles over time. See for yourself: 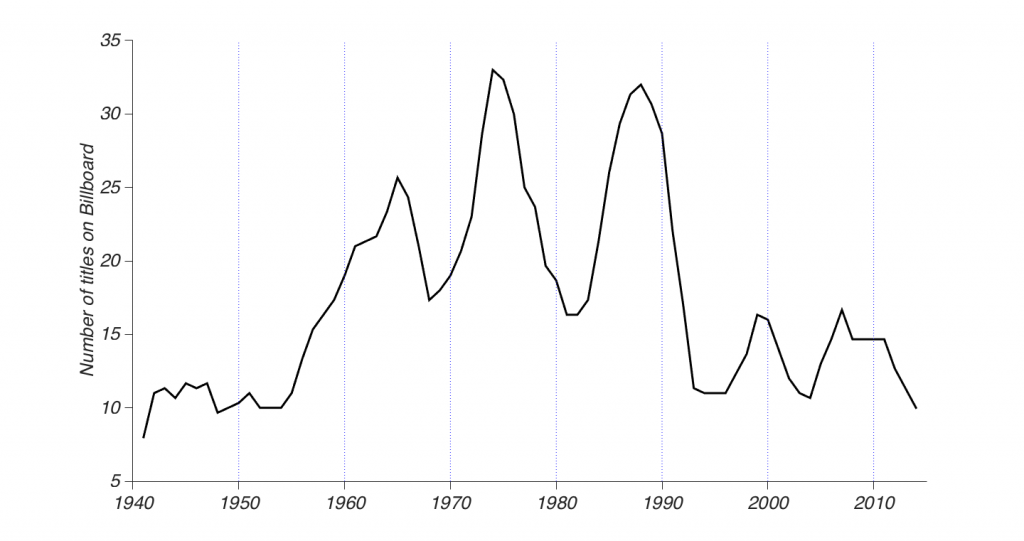 Basically, diversity ramped up soon after the introduction of the BillBoard charts, and then had distinct peaks in the mid-1960s, mid-1970s and late 1980s. The late 1990s peak is already much diminished, ushering in the current era of the unquestioned dominance of Taylor Swift, Katy Perry, Rihanna and the like. Perhaps this flowering of peak diversity in the 1970s, 1980s and 1990s accounts for the distinct sound that we associate with these decades?

Now, it would of course be interesting to see what drives this development. Perhaps generational or cohort effects involving the proportion of youths in the population at a given time?

Note 1: “Diversity” as literally “number of different songs over a given time period”. The temporal difference density. It is quite possible that these “different” songs are actually quite similar, but there is no clear metric by which to compare songs or a canonical space in which to compare them. Pandora has data on this, but they are proprietary. So if you prefer “annual turnover rate”, it would probably be more precise.

Note 2: My working hypothesis as to what drives these dynamics (that are notable phase-locked to decade) is some kind of overexposure effect. A new style comes about that coalesces at some point. Then, a dominant player emerges, until people get bored of the entire style, which starts the cycle afresh. A paradigmatic case as to how decade-specific the popularity of music is would be Phil Collins.

This entry was posted in Science, Social commentary. Bookmark the permalink.

5 Responses to Tracking the diversity of popular music since 1940